Little Princess and McIntosh have made the news! 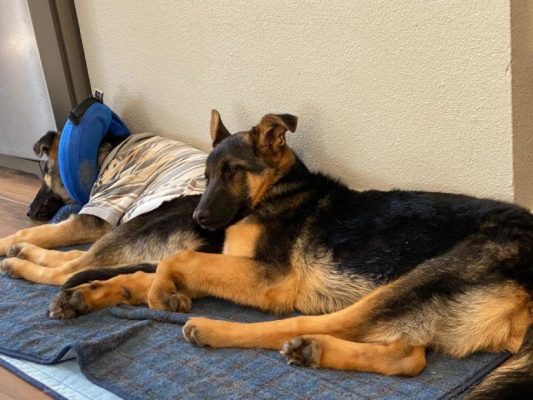 About two weeks ago, a 4-month-old German shepherd puppy named Little Princess was delivered to the care of German Shepherd Rescue of Orange County. She was followed shortly thereafter by MacIntosh, a puppy between 5 and 6 months of age who arrived from another shelter.

They both had the canine parvovirus — a highly contagious virus that can affect a dog’s gastrointestinal tracts. Puppies typically receive vaccines for the virus in addition to other diseases such as rabies.

“It was boom, boom, boom — one after the other,” said Maria Dales, the executive director and founder of the rescue in Newport Beach. “We’re lucky that we got both of them to the vet, separately, and identified it and got them the right treatment. It’s unfortunate. Simple puppy shots … can prevent this.”

And on top of that, the two suffered injuries that had been left untreated in their time with their previous caretakers. Little Princess has an open wound that spans much of her back and MacIntosh’s leg had been broken in three places. Vets said it was unlikely he would use of that leg again, according to Dales, and it would likely have to be removed.

Foster mom Debby Kreutzkamp, who has been fostering dogs for 15 years with the rescue organization, said Little Princess hid underneath a table when she first arrived at Kreutzkamp’s Riverside home. She said her husband noticed the dog’s coat appeared “sticky.”

She thought it was just dirt until she started to wash and shave the pup’s fur. That’s when she discovered the gaping wound.

Little Princess and MacIntosh get along well and turn to each other for comfort, Kreutzkamp said. At first, Little Princess was a little “standoffish” compared to MacIntosh, who was outgoing from the start.

Dales said she started the rescue group about 25 years ago. She started by taking one dog every Saturday from a shelter in Los Angeles, sitting in front of a PetSmart and encouraging the dog’s adoption. One by one her team, primarily volunteers, came together to form the organization she helms.

She said the nonprofit is a “business that wants to put itself out of business,” but that there is still a great need.

The last year has been especially intense, said Dales. She noted that the circumstances behind surrendering dogs changed with the arrival of the coronavirus pandemic. It used to be that people gave up their pets because they didn’t have enough time to care for the dogs properly, or they were going back to school. Now, the reason most cited by people surrendering pets is economic: They’ve lost their jobs or have been forced to downsize.

Medical expenses for Little Princess and MacIntosh are estimated to be at about $5,000, including aftercare for both the treatment of Little Princess’s back wound and the removal of MacIntosh’s injured leg.

The rescue is looking for donations.

“They’re coming along, but it’s still a challenge and as rescuers, we love all animals,” said Dales. “We don’t want to see animals suffering. When you see puppies so neglected by their ‘caregivers’ it reminds you why we have to be here to look after them.”