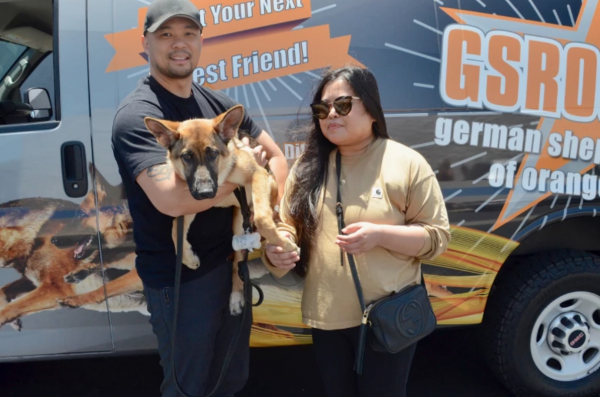 Pia and Leo Bernal were looking to find a puppy, preferably through adoption.Having secured approval to adopt from German Shepherd Rescue Orange County, the couple drove from San Diego to Costa Mesa a couple of Saturdays ago to retrieve 5-month-old Kodie during the organization’s bake sale event held at Centinela Feed and Pet Supplies.“We checked out every rescue we could find,” said Leo Bernal. “We were looking almost every day all over Southern California and came here, rather than a breeder, and found Kodie.”

“It’s shocking that beautiful dogs like these need homes,” Pia Bernal chimed in.

“We have rehoused over 10,000 dogs since inception,” explained Dales. “There is a need for homes for larger breeds. The shelters are overpopulated with German shepherds, mostly because they are not necessarily understood.”

Dales explained that people often take the breed into their homes for the wrong reasons.

“The dog isn’t always going to incorporate into the family unit. You can’t expect to take a German shepherd home and expect them to settle in and snuggle,” said Dales. “We’re matchmakers and like to place the best possible home for the personality.

“For example, if you’re a senior or disabled person, we’re not going to put you with an active dog,” she said. “Or, if you work full time, you shouldn’t get a puppy.”

Dales stressed that getting a dog under the wrong circumstances is the reason why so many are being surrendered.

Currently shelters are having a tough time placing many rescue dogs, not just German shepherds, Dales said, but all large breed dogs

“There is an unprecedented number of people surrendering dogs,” said Dales. “The system is not capable of absorbing the numbers that are big dogs.”

She noted it’s easier to house five or six pugs in a foster home, for example, than five or six German shepherds.

“All rescuers are experiencing this and there’s no way to absorb,” said Dales. “It’s an unusual time — so much influx of unwanted dogs in shelters.”She noted that backyard breeding, along with people taking in pets during the pandemic while they were working from home, then deciding they couldn’t keep them once they returned to the office, have played roles in shelter overcrowding.

Among the other reasons given for a dog being surrendered to a shelter is an owner’s death, a child that’s allergic, unexpected costs involved, the time it takes to nurture the pet, or incompatibility between the pet and the household.

“Our organization currently has over 100 dogs and pups counting on us,” said Dales. “We place them in foster homes and boarding kennels paying $25 a night. Our own kennels can house 34 dogs, mostly senior and disabled. Every time we have an opening we fill it, dogs come to us from shelters or a private party that can’t keep them. Most rescuers can’t afford to board dogs and have to rely on foster homes.”

Recently the shelter picked up two German shepherds, 18-month-old siblings Malachi and Madeline, from a high kill shelter. “They were in two different wings and because our alert volunteer noticed similar I.D. numbers we reunited them so they would stay together,” said Dales. “We raised funds so we could hire a special trainer. After all, if someone’s going to adopt two large dogs we want to give them the best start we can.”

She explained that fundraising in the way of bake sales every two months is the group’s primary mode of support along with reliance on volunteers.

Dales recommends that a potential pet owner should make an informed decision before committing to adoption. There is a need when planning on getting large breeds like German shepherds to gather as much information in advance by studying and learning about the breed. Young dogs, especially, require leadership, training and discipline.

Dales believes that giving a pet a home should be considered pet guardianship rather than ownership because of the responsibility involved in the care.