Some common misconceptions about German Shepherds

Here are a few myths about German Shepherd dogs- 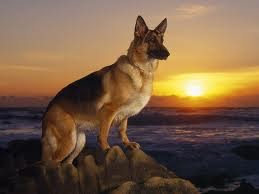 Myth #1. Puppies are better than adult dogs – especially if I have small children.

Truth #1. Everyone loves a puppy, and while small children may coo and awww over the sight of a newborn puppy, putting two separate creatures with reduced impulse-control together is more likely to result in chaos than it is in adorable photographs. Getting a puppy for your child is putting a dog – with no impulse control and no sense of what the world is like – with a scary, undisciplined figure who might very well hurt it. That is not to say that puppies and babies are incompatible, but potential dog owners should monitor the situation carefully and consider either waiting until the child is older to adopt a dog or adopting an older, more experienced dog who is less likely to snap if, for example, a child pulls his tail or prods him repeatedly. German Shepherd puppies are not necessarily aggressive, but most puppies do have a proclivity to harmless nipping and chewing that might not bother an adult, but might damage the sensitive skin of a toddler, or destroy the lining on her favorite stuffed toy. Bottom line, if you have young kids, don't pass over that older dog who may actually make your life easier…

Truth #2. Another untrue myth that leads to much disappointment and disillusionment among dog owners. Female dogs, like female humans, are no more likely to be meek or docile than their masculine counterparts. In fact, female dogs are commonly more alpha than their male counterparts. They are certainly not to be underestimated. (Just like human females, eh?) Male dogs can be just as laid-back and mellow as female dogs – perhaps more so, if they have been properly neutered – and female dogs can be very alpha.

Myth #3. SPAYING MY DOG IS INHUMANE – I WANT HIM/HER TO HAVE PUPPIES

Truth #3.No, what's actually inhumane is subjecting a dog to the perils of breeding, and all the health risks that go with not altering your dog. In addition, bringing a litter of puppies you are unable to healthily cope with into the world is not fair. Millions of “purebred” dogs die in shelters every year. Not only does spaying and neutering drastically reduce the risk of violence and aggression in your German Shepherd dogs, but it also protects both you and your pets from the risks of more homeless puppies and dogs in this world. Furthermore, dogs that are neutered are more pleasant companions, happier dogs. Spaying or neutering your dog puts them at diminished risk for many related illnesses. Spay your dogs, and be a part of the solution, not the problem. Before you breed your dog, go walk an animal shelter or check out our website www.gsroc.org.